I know it's dangerous to delve into an area intended for experts, historians and professional writers but I need to find answers. I also need to write so here I am giving myself a ...writing challenge about a historical phase in mosaic art that I want to understand.

A couple of weeks ago, while going through some of the things I write for the blog, something new emerged. The transition from pebbles or uncut stones into tesserae for mosaic construction.

I realised that in the The essential visual guide to mosaic post that I had published when I started this blog in 2010 there was no mention of that phase or the transition. This means I must rewrite it...

Anyway. I was VERY lucky to come across the mosaic from Sabratha and voilà...a new post and a challenging topic to investigate.

And so I began googling and reading a variety of articles and personal blogs. But more than anything this was a writing challenge. You see, writing reveals things to me. I saw that happening. So, I'm sticking to it.

Of course, what I write here is my own opinion and is subject to confirmation from the experts. As far as the dates ascribed to the mosaics are concerned, I have provided the dates that I have found from the various sources and which I have double checked.

One thing is almost certain. Tessellated mosaics (mosaics using tiles, stones that have been cut and not used in their original state) are considered to have appeared at some point in the 3rd century BC.

Now, will you join me on a journey to Libya, Sicily and Greece to muse over some truly intriguing mosaics? 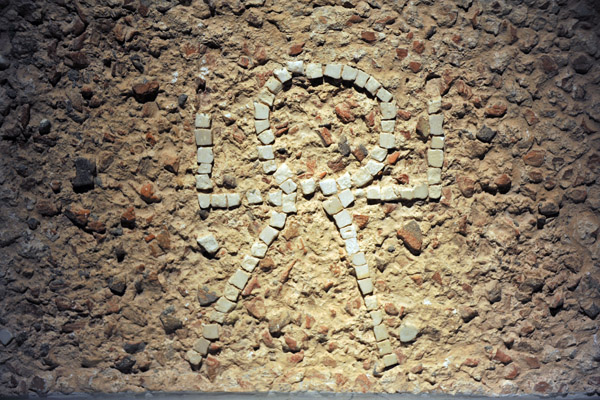 
When I stumbled upon this photo from Sabratha, I was in awe.

Sabratha in Libya was a Phoenician trading-post that served as an outlet for the products of the African hinterland and it enjoyed prosperity during the 3rd and 2nd century BC.

According to what I have found on the internet, Sabratha boasts both Hellenistic and Byzantine period mosaics. In the museum of Sabratha, there are some amazing mosaics in exhibit. The most important mosaics come from a Basilica from the time of Justinian.

The above mosaic from Sabatha clearly shows the use of tesserae even if only a little figured was mosaiced (or seems to have been mosaiced). Since I am not aware of what the original mosaic looked like or if this is what it actually looked like more or less, I will just make some observations based on what I see.

The technique of the little man mosaic in Sabratha is called opus signinum which is a kind of pavement used in Roman times that was made with broken tiles mixed with mortar. Floors made this way were common in Hellenistic Sicily.

What's fascinating in this picture is that we have a mix of opus signinum and opus tessellatum (mosaic using tesserae as we know it today). Two in one!

However, in Sabratha, a city that had ties with Rome (similar mosaics have been found in Ostia), the mosaics are clearly in a tessellated form as this picture here below demonstrates. This is from the Roman baths and it should be from the 2nd century.
. Now, let's go to Italy for another mosaic "mix".

Next stop. Morgantina in Sicily. 
In the above mosaic from Morgantina, we see both uncut stones and tesserae into one single mosaic.

The mosaic floors in Morgantina are considered to be among the first examples of mosaics using tesserae in Magna Grecia. From the information I could gather, they are dated 3rd century BC (2nd half of 3rd century).

Look at the background surrounding this mosaic. It's decorated in random order with stones that are not completely square. Most of them are square enough but the way they were juxtaposed is not a sign of a flourished mosaic style that we would observe in other mosaic floors throughout the same period.

I doubt if this mosaic blending random stones and tesserae would occur at a later period (from the 3rd century that marked the shift into tessellated mosaics).

Here's a tessellated mosaic from the House of Ganimedes in Morgantina, made with tesserae, unlike the one before which is apparently an exception according to what I have been able to find on the internet. 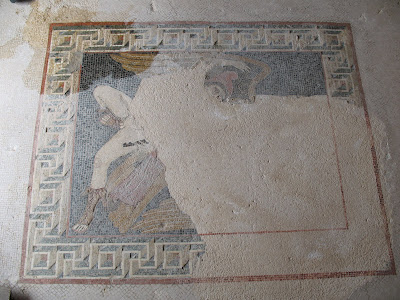 This last mosaic must be the most unpredictable! This is from Delos island. The mosaics on this special mosaic island in Greece date from the 2nd century BC. The mosaics are in tessellated style.

But this mosaic here tells another story, a non-tessellated story.


But before showing some "real" (tessellated) mosaics from Delos, here are two vivid examples of "mosaic mixed technique" from Delos.

The transition is evident here, right?

One of the most famous mosaics from Delos is the one featuring Dionysus riding a panther from the House of the Masks which is dated ca 120 - 80 BC. The building may have served as a hostel for actors, hence, its name. 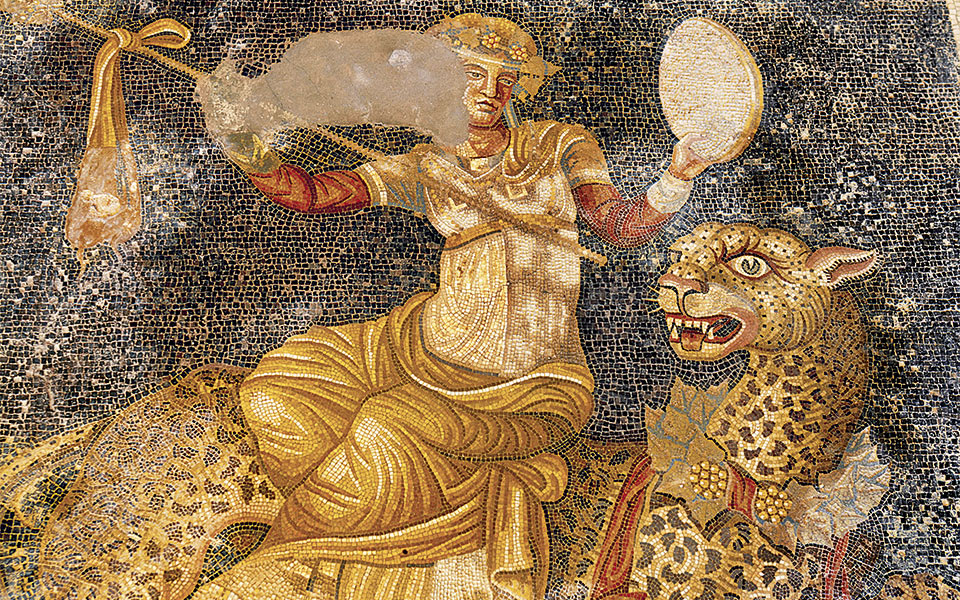 Mosaic floor depicting Dionysus seated on a panther, from the House of the Masks, Delos.
image credit

Another mosaic now part of the Archaeological Museum on the inhabited island of Delos is this one here. King Lycurgus of Thrace killing Ambrosia, which is changed into a grapevine. Clearly and absolutely tessellated.

I find this mosaic absolutely remarkable for two reasons.

Firstly, its technique is perfect considering that it was made end of 2nd century BC and that it measures 69 x 73 cm. Try to zoom in and you will see what I mean.

Secondly, its dark background is testimony to a refined and more sophisticated mosaic making technique - as early as the end of the 2nd century BC - that looks at the human form rather than patterns. It brings to mind the frescoes from Pompeii and of course the pebble mosaics in Pella from the 4th century BC. King Lycurgus of Thrace killing Ambrosia, which is changed into a grapevine.
Greek mosaic from Delos, end of 2nd century BC, 69 x 73 cm. Archaeological Museum of Delos
From wikipedia image credit


Judging from these three mosaics that speak their own language - actually I'd say they are bilingual - someone would agree that indeed the transition did occur somewhere in the 3rd century BC.

Of course you didn't need me to say that. All the books say that. But seeing how the two styles overlap is something else and I hope that I have achieved in sharing the excitement regarding the transition from pebbles to tesserae excitement with you all!

As I said in the beginning of this post, this was more of a writing challenge (on mosaic art) than anything else so please forgive me if I have said something stupid or unfounded.

You see, mosaic art is VERY challenging not just in its making but also as a subject to study. The more you read about the history of mosaics, the more new information you will be inundated with.