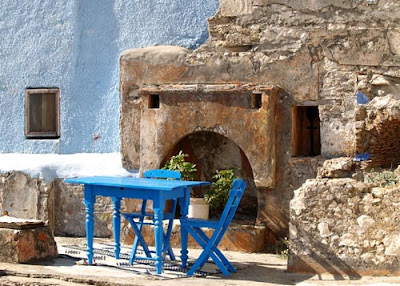 We all know about Mykonos or Santorini, Rhodes or Crete but how much do we know about Kastellorizo?

Greece is full of places of unexplored incredible beauty and worth and Kastellorizo is one of them. The island, which is also known as Megisti, is the Aegean's easternmost island. A tiny but very beautiful island of the Dodecanese. It consists of a circular port of about 50 inhabited houses. Even though the island has very few inhabitants, they are all very hospitable and wait on the port to welcome the tourists.

A couple of panoramic views...

This beautiful blue and white house on the island was featured in the film Mediterraneo as Vasillisa's house. I wish they could make more films like that one! 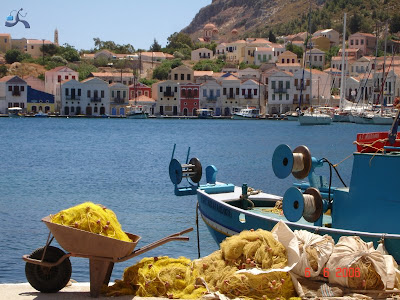 What a colourful island! An inspiration for an artist.

This is how far Kastellorizo is from Greece....The location of the island is very remote and sadly causes various problems to the island and its inhabitants..... 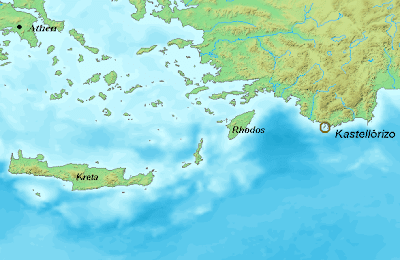 The traditional character of Kastellorizo along with its unspoilt beauty result into a landscape that can only make your heart beat. This house is a perfect example for this. 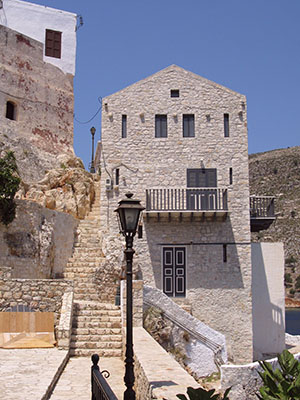 What else is there on the island? Well, two things.

The mosaic floor of the "Avlogyro" square in the Horafia district of Kastellorizo is in excellent condition and features a roundel with a typical choklakia swirling radial design. Known as choklakia mosaics, they are made of black, white and sometimes reddish sea pebbles, and are to be found throughout the Dodecanese islands (for example Symi and Lindos on Rhodes). The mosaic tradition dates back to Byzantine times and motifs include abstract geometric forms as well as folkloric pictorial depictions.

As you can see in the "limestone beach" picture above, Kastellorizo island is rich with limestone. The island's geology is almost exclusively limestone. Due to the lack of significant flora covering the island, the landscape shows many features of karstification. There are a number of notable sea caves including the so called Blue Grotto which is much larger than its namesake in Capri.

The "limestone beach" picture is worth a million words, right?

Everything is so overwhelming about this island, about Greece in general. Actually "stumbling on" the mosaic floor and the "limestone beach" was the reason behind this post but the wealth of information on limestone made me decide I had to split the posts.

In the next post I will be "digging deeper" into limestone and talk about my own personal experience with mosaic making.

All images used in this post link back to their original source.